Compressed gas is used for cryogenic cooling during machining. This pressure (drop) causes a strong cooling of the gas. The temperature of CO2 drops to -78°C during expansion, while the temperature will be another 100 °C lower for liquid nitrogen. So, the cooling capacity is huge. During the machining, chips will be formed by bringing the material to flow. To reach this point - the forming of a chip- the temperatures will be high.

In addition to the cooling properties, the gases used are also completely neutral. This means that they have no chemical impact on the product or on humans. Both CO2 and nitrogen are gases that occur in the air. The CO2 used is captured from other industrial processes as by-products and therefore does not need to be specially produced. In contrast to conventional oil-based coolants, a metal product does not need to be cleaned afterwards. Only a drying process may be necessary to treat corrosion-sensitive materials. After all, some water can always be left behind due to possible ice formation.

However, the question sometimes arises as to whether cryogenic cooling is so environmentally friendly when compared with an emulsion cooling that can be reused many times. Cryogenic gases can only be used once.

A paper from the University of Montreal (Canada) from 2018, 'Characterization of machinability and environmental impact of cryogenic turning of Ti-A6l-4V', presented an interesting comparison. Cryogenic cooling was compared to cooling with a classical emulsion when turning a standard titanium alloy. In addition to observed benefits in terms of tool wear (improvements of up to 50 percent under equal conditions) and roughness (Ra values up to 19 percent lower under equal conditions) of the products, a full LCA analysis was also carried out. In such an LCA ('life cycle assessment'), all possible environmental impacts are identified throughout the entire life cycle of the process. So it wasn't just the one hour of operation that was compared, but also the creation of the tools, the coolant and the recycling of whatever is possible. All steps are counted via a standardised score (the Eco-99 indicator).

The following figure from this paper gives an overview of the two methods of cooling and their impact. The biggest difference is in the production of crude oil. This is a very environmentally-unfriendly option. Turning titanium will also be possible at slightly higher speeds (which involve higher temperatures) thanks to cryogenic cooling, making it more productive. 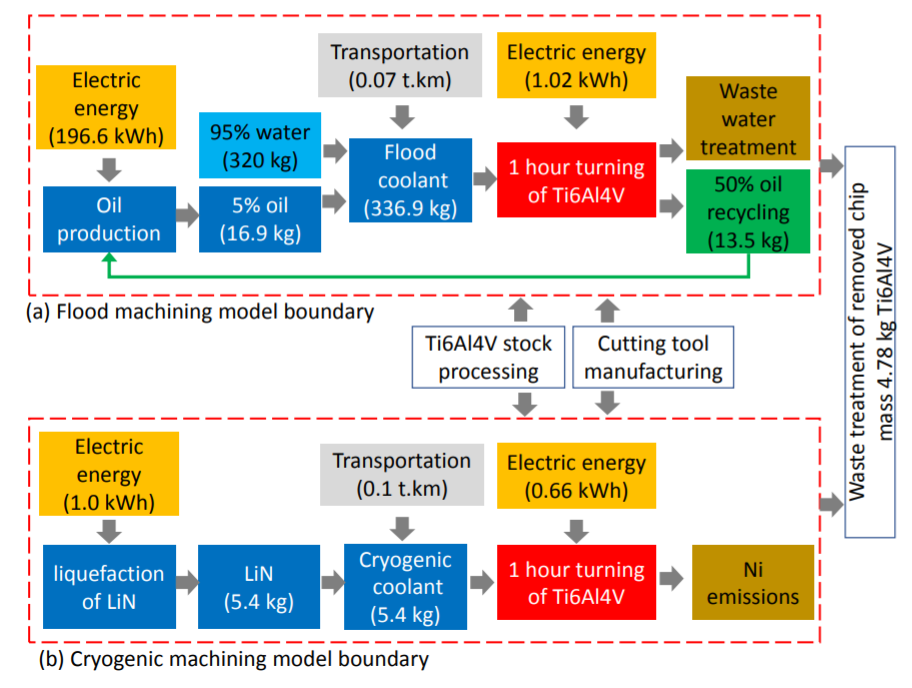 Comparison between the different aspects of both cooling methods

Detailed calculations show that the environmental impact (expressed in 'millipoint', mPt) of the entire process in cryogenic cooling is up to almost 60 times lower than in conventional cooling. This is shown in the following summary table.

In conclusion, cryogenic cooling can not only offer advantages in terms of wear and tear, productivity and finish (roughness), but is also a neutral and environmentally-friendly method that translates into other advantages. Not only is the impact on the environment positive, but all kinds of studies indicate that operators run health risks if they inhale a piece of oil vapour for years at a time. These effects are often unknown and only come to the surface in the long term, but they are present. When using neutral gases, such as CO2 or nitrogen, this problem is not present.